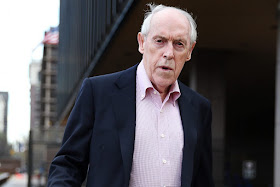 The Philadelphia Inquirer is typically pro-prosecution.

It's something that defendants in a long line of corruption cases can attest to, such as Vince Fumo, Chaka Fattah, the so-called rogue cops, former L&I Inspector Dominic Verdi, the Traffic Court judges, state Senator Larry Farnese, etc.

The Inquirer's usual pattern is to trumpet the allegations of prosecutors as proven facts, which can be a problem when it comes to the presumption of innocence. It's also troublesome if the defendants in these corruption cases are actually found not guilty at trial, as with the rogue cops, Verdi, and Farnese. After all, that's why they play the games, because sometimes the underdogs win.

But on Monday, the Inky did something new in the war on defendants in corruption cases: they actually denounced a couple of defendants on the editorial page while they were on trial for their lives. While  their fates were actually in the hands of a jury.

In the case of payday lending pioneer Charles Hallinan, and his lawyer, Wheeler K. Neff, the Inquirer blasted both of them on the editorial page under a headline that said, "Why payday loan sharks should be arrested and tried."

In the case of Hallinan and Neff, a business man and his lawyer have been hit with a RICO indictment as the government is attempting to criminalize the previously tolerated practice of payday lending.

It's something for a jury to decide, whether payday lending should indeed be criminalized. But the Inquirer editorial board already has the whole thing figured out.

In case you missed it, in the editorial that was originally written on Oct. 13 and updated on Monday, Oct. 16, the Inquirer wrote:

"It is a relief to see federal prosecutors and regulators finally cracking down on payday lenders. While the moves are past due, it is unclear if the prosecutions will be enough to deter a sleazy industry if tough new restrictions will last.

"Payday lending is simply a genial term for loansharking. Lenders make short-term loans to cash-strapped individuals at exorbitant interest rates that can top 800 percent. The high-cost loans leave borrowers, often already living on the edge, deeper in debt or even bankrupt.

"That's why it was good to see federal prosecutors bring racketeering and conspiracy charges against one of the biggest payday lenders in the region, Charles Hallinan, owner of MyNextPaycheck and more than two dozen other loan companies . . .

"Regardless of the outcome of Hallinan and Neff's trial," the newspaper editorial concluded, "more prosecutions and regulation are needed to stop payday lending abuses."

The newspaper also ran a photo of Hallinan with the editorial. The only thing they forgot to do was to tell the jury to convict the defendants.

On Monday, faced with prejudicial publicity, the judge in the case, at the behest of defense lawyers, called a halt to the trial to question jurors about whether they had seen the editorial. The judge asked for a show of hands but nobody had read or would admit to reading the editorial.

It's standard jury instructions for jurors to be told not to read anything about the case they are sitting in judgment on. But jurors will tell you that it's nearly impossible to tune out the media in the age of the Internet and social media.

Defense lawyers in the payday lending case declined comment, and the trial, which began last month, resumed. It's expected to be finished by the end of this month.
bigtrial.net at 9:30 PM
Share