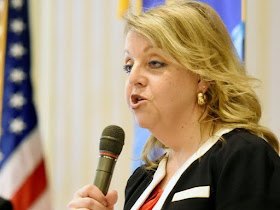 Now there's a star witness you can have confidence in.

In a second email sent that same day, McQueary complained to Eshbach about "being misrepresented" in the media. And then McQueary tried to straighten out a couple of misconceptions, writing that he never went to Coach Joe Paterno's house with his father, and that he had never seen Sandusky with a child at a Penn State football practice.

"I know that a lot of this stuff is incorrect and it is hard not to respond," Eshbach emailed McQueary. "But you can't."

That email exchange, divulged in a couple of posts by Penn State blogger Ray Blehar, have people in Penn State Nation talking about prosecutorial misconduct. Naturally, the A.G.'s office has nothing to say about it, as an office spokesperson declined comment today.

But McQueary wrote Eshbach, while copying Agent Anthony Sassano, "I feel my words are slightly twisted and not totally portrayed correctly in the presentment."

"I cannot say 1000 percent sure that it was sodomy. I did not see insertion," McQueary wrote. "It was a sexual act and or way over the line in my opinion whatever it was."

McQueary also complained about the media attention he was getting.

"National media, and public opinion has totally, in every single way, ruined me," McQueary wrote. "For what?"

Later that same day, McQueary wrote a second email to Eshbach and Sassano.

The reference about his father not accompanying him to a meeting with Joe Paterno was probably McQueary's attempt to correct a mistake in a Nov. 5, 2011 Sara Ganim story about the grand jury presentment that ran in the Harrisburg Patriot News.

In her story, Ganim wrote that according to the indictment, "On March 1, 2002, the night before Spring Break, a Penn State graduate assistant walked into the Penn State football locker room around 9:30 p.m. and witnessed Sandusky having sex with about 10 years old . . . The next morning, the witness and his father told head football coach Joe Paterno, who immediately told athletic director Tim Curley."

Then, McQueary returned to the subject of the bad publicity he was getting over the grand jury report.

"I am being misrepresented in the media," McQueary wrote. "It just is not right."

That's what prompted Eshback to write, "I know that a lot of this stuff is incorrect and it is hard to to respond. But you can't."

"It's incredible, it's evidence of prosecutorial misconduct, trying to steer a witness's testimony," Snedden said. "It shows that the prosecution's manipulating the information, throwing out what they don't want and padding what they do want . . . It very strongly suggests a fictitious presentment."

During the defamation suit McQueary filed against Penn State, Eshbach was sworn in as a witness and asked to explain what she meant by telling McQueary not to talk.

"My advice to Mr. McQueary not to make a statement was based on the strengthening of my -- and saving of my case," Eshbach testified. "I did not want him [McQueary] making statements to the press at that time that could at some time be used against him in cross-examination. He [McQueary] was perfectly free to make a statement, but I asked him not to."

There's another angle to the prosecutorial misconduct story line -- this email exchange between McQueary and Eshbach that was reported on by Blehar was not turned over by the prosecution to defense lawyers during the Sandusky trial and the trial of former Penn State president Graham Spanier.

While we're on the subject of prosecutorial misconduct, at the Spanier trial, it was McQueary who testified that during the bye week of the 2011 Penn State football season, he got a call on his cell phone from the attorney general's office, tipping him off that "We're going to arrest folks and we are going to leak it out."

"The Sandusky grand jury presentment of Nov. 4, 2011 provided a misleading account of what eyewitness Michael McQueary reported to Joe Paterno about the 2001 incident," Blehar wrote. "Rather than stating what McQueary reported, it stated he reported 'what he had seen' which led the media and the public to erroneously conclude the specific details were reported to Paterno."

Blehar cited the words of Joe Paterno, who issued a statement on Nov. 6, 2011, saying that McQueary had "at no time related to me the very specific actions contained in the grand jury report."

So what exactly did you tell Paterno, the prosecutor asked McQueary.

Blehar also points out that not even the jury in the Sandusky case believed that Sandusky had anally raped Victim No. 2  in the Penn State showers, because they came to a not guilty verdict on the count of involuntary deviate sexual intercourse.

Blehar then cites four other witnesses in the case who also testified that McQueary never used sexual terms in describing what he had allegedly seen in the shower.

In the email, McQueary doesn't say who the he was who was out the night before. In his blog post, Blehar takes the he as a reference to McQueary's father.

"Wait, what?" Blehar writes. "Paterno was in State College on Friday night. If this statement is true, then Mike did NOT meet with his father (and Dr. Dranov) immediately after the incident(because John Sr. was 'out of town.')"

"Another fabrication?" writes Blehar. "And the AG knew it."

In handwritten notes written in 2010, McQueary doesn't mention any meeting with his father and Dr. Dranov. Instead, he writes that he "drove to my parents' house" and "spoke with my father about the incident and received advice."

He also reiterates, "to be clear: from the time I walked into the locker room to the time I left was maybe one minute -- I was hastened & a bit flustered."

A hazy one-minute memory that McQueary himself admitted he had no idea "whatever it was" he had actually witnessed.

But it was a hazy, one-minute memory that the AG's office wrote an entire grand jury presentment around. How weak is that?

It was flimsy evidence like this that led Special Agent Snedden to conclude that McQueary was not a credible witness back in 2012 when Snedden was investigating whether former Penn State President Spanier deserved to have his high-level security clearance with the federal government renewed. Snedden wrote a recently declassified 110-page report that concluded there was no cover up at Penn State because there was no sex crime to cover up.

Because McQueary gave five different accounts over the years of what he supposedly witnessed during that one minute in the Penn State showers.

"I'd love to see McQueary's cell phone records, absent whatever dick pics he was sending out that day," Snedden cracked, referring to the day McQueary witnessed the shower incident, and then called his father to figure out what to do.

"Did he even call his dad?" Snedden wondered.

Snedden renewed his call for an independent investigation of the entire Penn State scandal, and the attorney general's role in manipulating evidence in the case.

"Anybody who cares about justice needs to be screaming for a special prosecutor in this case," Snedden said.

John Ziegler, a journalist who has covered the Penn State scandal since day one, agreed.

"This seems like blatant OAG misconduct and an indication that they were acutely aware their case had major problems," Ziegler wrote in an email. "Eshbach's response is stunning in that it admits errors in grand jury presentment and tells Mike to shut up about it."

Ziegler said the possibility that Mike McQueary never met with his father and Dr. Dranov, his father's boss, in an emergency meeting, if true, was big news.

"This is HUGE for several reasons," Ziegler wrote. The meeting, which supposedly occurred on the night McQueary witnessed the shower incident was the "ONLY piece of evidence that has EVER been consistent with Mike witnessing something horrible/dramatic" in the Penn State showers. And that's why "Dranov was brought in to meet with him [Mike McQueary] late on a Friday night in February," Ziegler said.

The AG's office, Ziegler speculated, "is desperate for evidence that Mike did something dramatic in reaction to" witnessing the shower incident.

And if the he McQueary was referring to in the email to Eshbach wasn't his father but was really Joe Paterno, Ziegler said, then that's another problem with the official Penn State story line. Because according to his family, Joe Paterno was in town that night and presumably available for an emergency meeting with a distraught assistant who had just witnessed a horrible sex crime in the shower.

McQueary didn't rush into the shower and try to save a helpless, 10-year-old boy.

He didn't call the police.

"The meeting with Dranov is all they have," Ziegler wrote.
bigtrial.net at 6:18 PM
Share