Cosby's Accuser Has A Secret 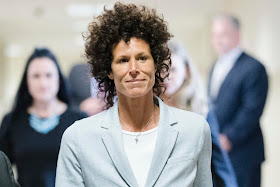 Andrea Constand, the woman who accused Bill Cosby of drugging and sexually assaulting her, has a few secrets she'd like to keep.

So in federal court in Philadelphia, where she's suing former Montgomery County District Attorney Bruce Castor for defamation, Constand wants to seal her deposition and keep her medical  and financial records private.

But those secrets may not keep. On Sept. 12, Judge Eduardo C. Robreno issued a ruling for Constand to show cause why the interim seal on her deposition should not be lifted. Cosby's lawyers, who filed as intervenors in the defamation case, have already received a redacted copy of Constand's deposition against Castor.

In a 12-page motion to seal filed Sept. 22 by Constand's lawyers, Bebe H. Kivitz and Dolores M. Troiani, the lawyers argue that Cosby's alleged victim would like to keep "sensitive personal information" under seal, and not have it exposed to Cosby and the media. Castor's lawyers, however, filed a motion last week, saying there is no justifiable reason for the secrecy since all of Costand's allegations against Cosby, as well as Castor, have been nationally and internationally publicized.

Judge Robreno has set a 9 a.m. Oct 20 hearing on the issue of whether Constand's sensitive personal information should remain under seal. In the meantime, with the graphic details of Constand's accusations already out there in People magazine, Vanity Fair, The New York Times, the Daily Mail, The Washington Post, etc., the only thing Costand may have left to hide is how many millions Cosby paid her to go away.

Constand is the 44-year-old former director of operations for Temple University's women's basketball team who claimed that in 2004, Cosby drugged her with three blue pills and then sexually abused her at his Elkins Park home.

Castor, the former Montgomery County D.A., declined to prosecute the case, forcing Constand "to seek any recourse in a civil action," her lawyers wrote in the defamation lawsuit.

But in not prosecuting Cosby, and granting him immunity, Castor did Constand a favor of sorts that would ultimately pay off for her. When Castor told Cosby's lawyers he wasn't going to be prosecuted, Cosby gave a 2005 deposition in the civil case where he admitted to drugging Constand, and engaging in sexual encounters with her. These were admissions that came back to haunt the comedian.

Constand's civil suit against Cosby was settled with a confidential payoff in 2006, probably for millions. Cosby would have been justified if he thought that was the end of it.

Then, in 2015, a new Montgomery County D.A., Risa Vetri Ferman, decided to reopen the criminal case against Cosby. And that same year, a judge decided to unseal Cosby's deposition in the old civil case.

Castor, who wanted to make another run for D.A. 2015, then made some statements about the old criminal case that angered Constand.

Castor said that if he had gone ahead with a Cosby prosecution, both Cosby and Constant could be portrayed "in a less than flattering light." Castor also said that Costand had lodged more serious sexual assault allegations in the civil lawsuit against Cosby than she divulged to police.

Constand had originally told police that when she woke up after Cosby drugged her, she found her brassiere around her neck.

But in her civil lawsuit, Constand claimed the comedian had fondled her breasts, penetrated her vagina with his hand, and placed Constand's hand on his penis, charges she would reiterate when she testified for a day and a half in the criminal case against Cosby last June.

"If the allegations in the civil complaint were contained with that detail in her statement to the police, we might have been able to make a case out of it," Castor said.

So Constand sued Castor for defamation. But she wanted to keep what came out in her lawsuit against Castor under seal. In the motion to seal Constand's records, her lawyers say, "This [defamation] lawsuit should not serve as a backdoor mechanism for Cosby and his counsel to obtain documents they would otherwise not be able to access in the criminal case."

Cosby is supposed to be retried next Spring.

In their motion to keep Constand's records private, her lawyers claimed that she was reluctantly brought into the spotlight.

Constand "does not hold public office nor is she a celebrity," her lawyers wrote. "She lived a very quiet and private life in Canada for 10 years. She is a private person who finds herself engaged in litigation based on [Castor's] efforts to defame her by statements to the media and the phenomenon of social media."

"Her private testimony and records concerning her medical and emotional care as well as her financial status should remain private," Constand's lawyers wrote. "Releasing it would not only violate her privacy rights, it would cause her embarrassment."

There was a confidentiality agreement in the defamation case regarding discovery [depositions of witnesses and responses to lawyers questions] that was approved by Judge Robreno back on March 8, 2017. What happens in discovery is usually confidential. But the judge may decide that the confidentiality he granted might be over when discovery is over.

Although Cosby's lawyers got a redacted copy of Constand's deposition in the defamation case, the
"entire deposition transcript" as well as and expert reports in the case remain under seal, her lawyers wrote. As does "evidence concerning plaintiff's medical and psychological treatment, financial information, including the deposition testimony and discovery responses."

"Rather than attempt to show cause, [Constand] spends the first six pages of her memorandum leveling nonsensical, false accusations intending to impugn the reputation of Mr. Castor," his lawyers wrote.

"Rather than waste the judge's time disproving each falsehood," Castor's lawyers wrote, they turned to the matter at hand, and concluded there was "no privacy interest at issue that justifies a seal."

"Moreover, [Constand] 'finds herself in litigation' with Mr. Castor because she filed a lawsuit against him one week before an election publicly accusing him of wrongdoing and alleging damages," Castor's lawyers wrote. Constant "knowingly gave up privacy rights when she sued" Castor. And now Castor "seeks to defend himself against baseless claims."

Constand "fails to articulate any embarrassment which would justify a seal," Castor's lawyers wrote. So Castor is "entitled to defend himself in the same public manner in which the accusations against him have been made."
bigtrial.net at 11:11 AM
Share