Boy In The Shower Says He Can't Remember 34 Times 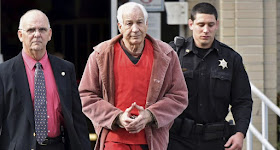 Allan Myers, the boy in the Penn State showers that Mike McQueary allegedly saw being raped by Jerry Sandusky, sure has a lousy memory.

Myers couldn't remember when a picture of him posing with Sandusky had been taken, even though it was at Myers' own wedding.

Myers couldn't remember telling a couple of state troopers who interviewed him in 2011 that Sandusky had never abused him.

Myers made all these fuzzy statements during a Nov. 4, 2016 hearing where he was called as a witness as part of Sandusky's bid for a new trial. A 48-page transcript of that hearing was released for the first time earlier this week, in response to a request from a curious reporter for a major mainstream media news outlet. Myers' pathetic performance on the witness stand proves what a screwed-up case this is, featuring overreaching prosecutors and a hysterical news media.

The media blew it in part because they showed no skepticism about witnesses like Myers, who, going by the transcript, clearly wasn't credible.

Myers, who was on the witness stand for less than an hour before Centre County Senior Judge John M. Cleland, said he couldn't recall or didn't remember 34 times.

Either he was dealing with early-onset Alzheimer's, or else he was lying about everything.

Before Myers was brought in as a witness, Sandusky was sworn in and the judge explained to him that since nobody knew what Myers was going to say, his testimony "could be harmful to your case."

So is this a chance you're willing to take, the judge asked. Sandusky told the judge his mind was made up.

"It is my decision to have Allan Myers testify," Sandusky told the judge.

Myers, a former Marine, testified that he originally got to know the former Penn State assistant football coach through his Second Mile charity.

"Did you think of Mr. Sandusky as a father figure," Alexander Lindsay, Sandusky's lawyer, asked.

Myers was shown a picture of himself posing with Sandusky at Myers's wedding. Lindsay asked if Myers remembered when that picture was taken.

"That I do not remember," Myers said.

Lindsay showed Myers a photo of a football camp when Myers served as a coach, and posed for a picture with some boys, along with Sandusky. Lindsay asked Myers how old he was in the photo.

"I don't remember," Myers said. "I don't even know what year that was."

"Well, were you an adult," Lindsay asked. "Do you know that?"

"Can you give us any estimate of your age," the lawyer asked.

Myers recalled that he lived in Sandusky's home "right after I graduated high school to attend Penn State."

"And I left there because he [Sandusky] was controlling and I left," Myers said. "And that was the end that I ever lived with him."

Sandusky was controlling, Myers said, but he didn't say anything about Sandusky being abusive.

Lindsay asked Myers if he remembered being interviewed on Sept. 20, 2011, by state Trooper James Ellis and Corporal Joseph A. Letter.

"I recall being interviewed," Myers said.

Lindsay gave Myers a copy of the police report and asked if it reflected what he told the state troopers.

"Yes," Myers said, before snapping at the lawyer, "Please don't raise your voice at me."

Lindsay asked if Myers remembered telling the troopers that he and Sandusky had often worked out at the Lasch Building.

Lindsay asked Myers if he recalled telling the troopers "nothing inappropriate occurred" in the shower with Jerry, and that at "no time were you made to feel uncomfortable."

Lindsay asked Myers if he remembered telling the troopers that after workouts with Sandusky, he and Jerry would return to the coach's home and shower in separate facilities.

Lindsay asked Myers if he remembered an interview he gave to an investigator named Curtis Everhart who at the time was working for Joseph Amendola, Sandusky's inept trial lawyer.

Lindsay asked if he remembered telling the investigator, "I am alleged Victim No. 2."

"I'm sure I did," Myers said, before adding, "I don't remember everything."

Myers was a month short of his 14th birthday in 2001 when the infamous shower incident occurred. The official grand jury report, however, says that Mike McQueary witnessed Sandusky raping a 10-year-old boy in the shower.

Oh well, nobody expects the prosecutors to get the details right when they're on a witch hunt to put an alleged pedophile in jail. Whether or not they have to make up the evidence themselves. And apparently, nobody expects the witnesses to remember whatever stories they told.

"I don't recall everything I told Mr. Everhart," Myers said.

Did Myers recall telling the investigator that he used to slap the walls and slide on the shower floor when he was taking a shower with Jerry?

"I can't recall everything I said in that interview back then," Myers said.

Lindsay read out loud a quote from a report that stated what Myers had supposedly told Everhart:

"The grand jury report says Coach McQueary said he observed Jerry and I engaged in sexual activity. That is not the truth and McQueary is not telling the truth. Nothing occurred that night in the shower."

"Do you recall telling him that," Lindsay asked the witness.

"Like I said, I can't recall everything I said back then," Myers said. "But if it's in there, I said it then, yes."

On the witness stand, Myers wasn't sure.

"That's what I said back then," Myers said. "Once again, I can't recall what I said then."

Lindsay read Myers more quotes from the interview with the investigator. In the quotes, Myers:

-- denied having sex with Sandusky;

-- repeated that "McQueary did not tell the truth;"

-- repeated that "I am alleged Victim No. 2 on the grand jury report;"

"That's what I said then," Myers said. "And once again, I can't recall everything I said then."

Lindsay asked Myers if he told the truth when he spoke to the investigator.

Allan Myers had once been Jerry Sandusky's biggest defender. He even wrote a letter to the editor of a local newspaper stating what a great guy Jerry was.

At the beginning, Myers kept saying that Mike McQueary was a liar, Jerry was a great guy, and that Jerry had never touched him inappropriately.

When asked how much he received from his settlement, Myers said," I'm not allowed to answer that question."

Lindsay asked Myers, who wasn't called as a witness during the Sandusky trial, where he was when the trial took place.

Asked if he could recall being in a specific place, Myers replied, "I can't recall where I was when the trial was going on . . . I can't tell you exactly where I was, I don't remember that."

It was Lindsay's contention that Sandusky deserved a new trial because the prosecutor, Joseph McGettigan, lied to the jury when he stated that the existence of Victim No. 2, the boy in the showers, was "known only to God."

As far as Lindsay was concerned, McGettigan knew that Myers was Victim No. 2, but didn't want to call him as a witness during the Sandusky trial because he had formerly defended Jerry.

On cross examination, the prosecution had a simple script. To reiterate that when he finally got his story straight, Myers was indeed a victim of Jerry Sandusky's.

Jennifer Peterson, a lawyer representing the Commonwealth, asked Myers if he remembered speaking to to Special Agent Anthony Sassano of the state Attorney General's office.

"I remember seeing him and speaking with him," Myers replied. "I don't remember exact dates and times and how long everything was."

"And you told him the top were sexually abused by Mr. Sandusky, correct?"Peterson asked.

"I don't remember exactly what I said in the meetings," Myers said. "I know then I was more forthcoming but not all the way [forth] coming because [I was] still processing everything and dealing with it."

"Were you sexually abused?" Peterson asked.

She didn't ask for any details, possibly because Myers probably forgot them.

After Myers left the witness stand, Lindsay put Sandusky up to testify as a rebuttal witness.

If Sandusky believed that Myers was going to finally tell the truth, and actually admit he was lying, Sandusky had just gotten torched

"Mr. Sandusky, did you ever sexually abuse Allan Myers in any way," Lindsay asked.

John Ziegler, a reporter who was in the courtroom when Myers testified, said he was glad that the transcript had finally been released.

"This is the only testimony of the person who is the epicenter of this whole thing," Ziegler said about Myers' central role in the Penn State scandal.

"And it's obvious to anyone who understands the case that he [Myers] wasn't telling the truth," Ziegler said. Myers' testimony was "a hundred percent consistent with a guy who had flipped for [millions] and felt bad about it, and didn't want to deal with it anymore," Ziegler said.

In contrast, when Sandusky took the stand, Ziegler said, "He was in tears, he was angry. It was righteous anger."

John Snedden, a former NCIS and FIS special agent who investigated the scandal at Penn State, said he was disturbed by Myers' evolving story.

"His initial statements are definitive and exculpatory," Snedden said. "His testimony then degrades into a wishy-washy, exceptionally foggy abyss."

"Being officially interviewed as the 'victim' of a traumatic event doesn't happen everyday," Snedden said. "And then you can't remember the specifics of that interview? Seriously?"

"It's clear why he [Myers] wasn't called by the prosecution" at the Sandusky trial, Snedden said. "His testimony is exculpatory and now serves only as an example of blatant prosecutorial manipulation."

Good point. And where the hell did they hide Myers during the Sandusky trial?