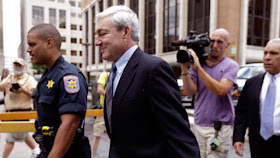 The jury in the Penn Sate case today convicted former PSU President Graham Spanier on one count of endangering the welfare of a child, but acquitted him on a second endangerment count, as well as a third count of conspiracy.

On the one count they convicted on, the jury, however, found no "continuing course" of criminal conduct. So under the law the child endangerment charge that Spanier was convicted of fell from a felony to a misdemeanor.

A misdemeanor charge of endangering the welfare of a child was the exact same charge that Spanier's former co-defendants, former PSU Athletic Director Tim Curley and former PSU Vice-President Gary Schultz, pleaded guilty to earlier this month. For a misdemeanor offense, first-time offenders such as Penn State's trio of former administrators are typically looking at a prison term of zero to nine months. The defendants could wind up with just probation. 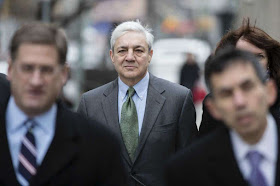 Samuel W. Silver, Spanier's lawyer, said he was heartened by the jury's acquittals on two of the charges, and that he would appeal the jury's conviction on the third charge. As far as Silver was concerned, the case was "replete with significant issues, both factual and legal." Then he announced that he would take no questions.

That's a shame because there are several bizarre wrinkles to the jury verdict that appear to be lost on the local citizenry. The statute of limitations in Pennsylvania for endangering the welfare of a child is two years. The incident that Spanier was convicted of, however, dated back to 2001 -- the infamous shower incident involving a naked Jerry Sandusky and a boy that was supposedly heard and seen by graduate assistant Mike McQueary.

That means the jury convicted Spanier for a crime that the statute of limitations had already expired on. You may hear more about that on appeal, where Spanier's legal team is confident of victory. Once they get their case out of Dauphin County, Spanier's layers are betting, state law may be applied.

The Spanier case is similar to the Monsignor Lynn case out of Philadelphia, because it was another high profile sex abuse scandal that also involved the misapplication of the state's original child endangerment statute. The Lynn case was twice overturned on appeal by the state's Superior Court, the same place where the Spanier case is now headed.

The state's original child endangerment law required Spanier to "knowingly endanger" the welfare of a child he was supervising, and had a duty to care for. How Spanier could have knowingly endangered a child victim he never met, a child victim who to this day the university doesn't know the identity of, and never produced as a trial witness may also be explored on appeal.

Meanwhile, back in Dauphin County, Deputy Attorney General Laura Ditka declared victory, telling reporters that the prosecutors in the Penn State case were "three for three." She was talking about the guilty plea bargains of Curley and Schultz, and the conviction of Spanier.

"He [Spanier] had a duty of care and protection for children who came to the Penn State campus and he failed in that duty," Ditka told reporters.

"These leaders endangered the welfare of children by both their actions and inactions," a grandstanding Attorney General Josh Shapiro added about Spanier, Curley and Schultz. "There are zero excuses."

The jury reached its decision today after 12 hours of deliberation, about as many hours as there were testimony in the case.

As the word went out that the jury had reached its verdict, thirteen sheriff's deputies filed into the courtroom, to guard against unruly spectators. It turned out to be overkill. The mood in the courtroom was solemn and business like among the tame crowd of senior citizens and reporters. There was no visible reaction to the verdict, or any outburst by Spanier, or any of his supporters.

It was similar to the unnecessary show of force in during the trial when Victim No. 5 appeared as a surprise witness, and the courtroom was guarded by extra deputies patrolling in vain for phantom cell phone movie makers.

After the verdict was read, Judge John Boccabella, a frontier judge famous for locking the doors of his courtroom whenever possible, went out of his way to compliment the jury.

"I never had a jury more intelligent," the judge asserted. He praised the jury for asking questions that supposedly got to the heart of the case.

An appeals court may take a different view.

The trial was a curious spectacle that originally was expected to last a week. But the government put on only two days of testimony that were largely fact-free and depended on raw appeals to emotion. The defense trumped the brevity of the prosecution case by not even calling one witness. Silver was that convinced that the prosecution didn't prove its case.

The prosecution's two star witnesses, former PSU administrators Curley and Schultz, were so ineffective that even the prosecutor wound up trashing both of them during her closing argument.

"Gary Schultz and Tim Curley are not our star witnesses," Ditka told the jury. "They're criminals."

"Tim Curley," she declared, was "untruthful 90 percent of the time."

"Gary Schultz, I would suggest to you was more truthful,"  she said, but that was because he wound up crying on the witness stand. Crying because he was guilty, Ditka told the jury.

Al Lord, a member of the university board of trustees, told reporters that he was "blown away."

"You can't endanger children if you set Jerry loose because you don't know Jerry's a pedophile, and frankly that's what this case is about," Lord said. 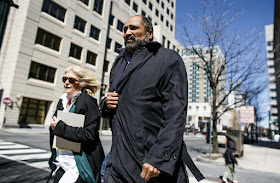 Lord said that prosecutors offered Spanier the same deal that Curley and Schultz got "seven freaking times" but that Spanier turned it down "because he knows he's innocent and he's a man of integrity."

"I wish I could say the same thing for the prosecution," Lord added.

Former football star Franco Harris told reporters that he felt bad for Sandusky's victims, but he added, "There is no way that Penn State wanted to harm kids. I mean, that's the furthest from the truth. So, that's the part that still has to be fought."

The defense was facing an uphill climb from day one. The main obstacle: a jury pool tainted by six years of saturation media coverage of the Penn State sex scandal. It was coverage that sadly displayed an unhealthy lack of skepticism for the story line fed to reporters by prosecutors and Louie Freeh. He's the former judge and FBI director who claimed to find evidence of a "callous and shocking" coverup at Penn State by top officials.

But even the jury today did their part to continue to unravel the official Penn State story line. The Dauphin County jury rejected the conspiracy charge in the case; the jury also found no continuing course of criminal conduct in the misdemeanor committed by Spanier.

A 2013 poll of Dauphin County residents commissioned by one of the defense attorneys in the case showed how biased the potential jury pool was, thanks to media malpractice. The poll, part of an unsuccessful campaign for a change of venue, found that 46.9 percent of those questioned in Dauphin County agreed with the statement that even if Penn State officials like Curley and Schultz did nothing illegal, "they should be punished."

Seventy percent of the people polled in Dauphin County agreed that "from very early on, officials like Curley and Schultz knew exactly what was going on with Sandusky."

Some 64.9 percent agreed that "the culture at Penn State and in the Penn State athletic department tolerated Sandusy's behavior." 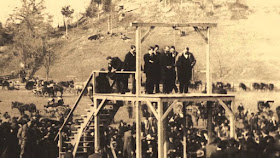 And 62.6 percent agreed that "Curley and Schultz helped to create the culture at Penn State that tolerated Sandusky's behavior."

So it was no surprise that Deputy Attorney General Ditka was able to obtain a conviction by offering up no new facts, but by endlessly reprising the story of Jerry Sandusky, the naked child-molesting "animal" lurking in Penn State's showers.

Like spectators at a frontier hanging, the citizens of Dauphin County can now go on with their lives secure in the knowledge that they did their part to clean up the sex abuse scandal at Penn State.

After court was adjourned, the saloons of Harrisburg were open for business.

More coverage from Lawnewz: Spanier convicted for something he didn't do.