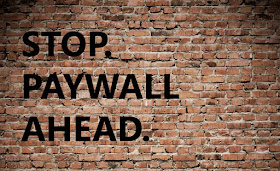 At 10:30 a.m. on the Tuesday after the Labor Day weekend, visitors to philly.com ran into a big surprise -- a brand new paywall.

If you were one of those readers who had already read 10 stories on philly.com that month, you were out of luck. No more freebies. Your only option, besides hopping on another computer, or accessing the site from another web browser, was to sign up for "unlimited digital access for 99 cents for four weeks, and $2.99 per week thereafter."

By the next day, Sept. 6th, philly.com, the formerly free website of The Philadelphia Inquirer and Philadelphia Daily News, recorded 67,804 "meter stops," meaning 67,804 readers had just ran into that paywall. "Of those who 'hit the meter,' we had 1,736 new digital subscribers sign up," wrote Fred Groser, chief revenue officer, in a Sept. 6th email to all employees of Philadelphia Media Network.

"As you all know, we launched our new digital subscription model yesterday, Groser wrote. "This initiative, by far one of our most important undertakings in years, has been in the works for many months."

PMN's strategy was to offer print subscribers "a very attractive offer for a digital subscription, giving them full access to our digital content on multiple devices for each household. We sent letters to about 180,000 subscribers announcing this with an option for them to decline the offer."

Groser advised all PMN employees when talking to readers to "please remind them that they will receive fewer ads and an improved experience with our site should they subscribe. Subscribers will not be served high-impact ads such as wallpapers and interstitials," Groser wrote, referring to web-page ads displaying age-restricted materials.

So the grand paywall experiment progresses, as philly.com seeks to find out whether local readers are willing to pay for news.

But Groser won't be around to see how it all turns out. He resigned two weeks ago.

Meanwhile, web page traffic at philly.com was rumored to be down about 30 percent by the end of the first week that the paywall was up.

So, as a free service to all those former visitors to philly.com who are now restricted from the site, here's what you missed.

Climaxing the newspaper's blanket coverage of the statue wars, former Inquirer fashion columnist Elizabeth Wellington weighed in to say that she also visited both statues and found the Afro Pick statue to be not empowering.

This was a major development, and in shocking contrast to Jones's stance.

Finally, Wellington reported that the racist Frank Rizzo statue deliberately snubbed the columnist by turning its back on her:

Maybe the [Afro-pick] sculpture can be a conversation starter. But not as it relates to Rizzo. If you approach Rizzo from the south side of John F. Kennedy Boulevard, you can barely see the Afro pick. And when I stood next to the Afro pick Tuesday afternoon and glanced diagonally to my right, Rizzo's entire powerful back was to me.

Just as the former mayor probably would have wanted it.

So the racism continues unabated outside the Municipal Services Building.

It will cost you only 99 cents for four weeks [and $2.99 a week thereafter] to tune into the further adventures of the Inky's PC posse, as they continue to confront our city's most dangerous racist statues.